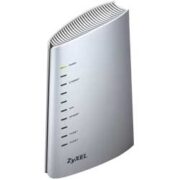 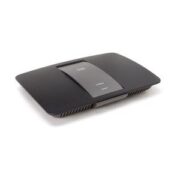 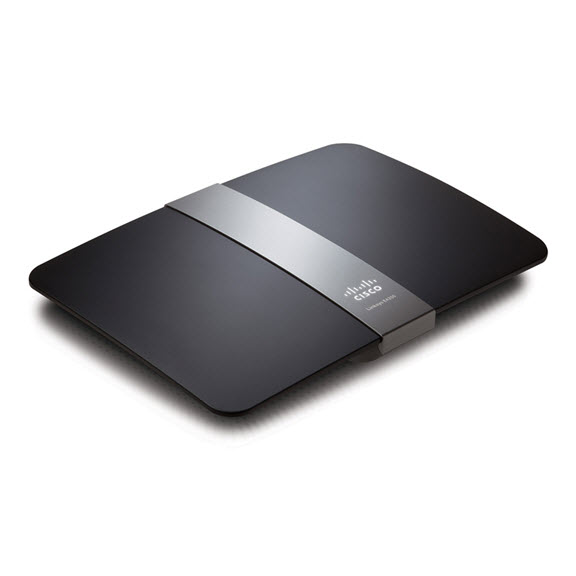 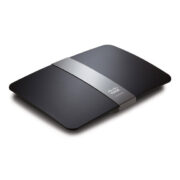 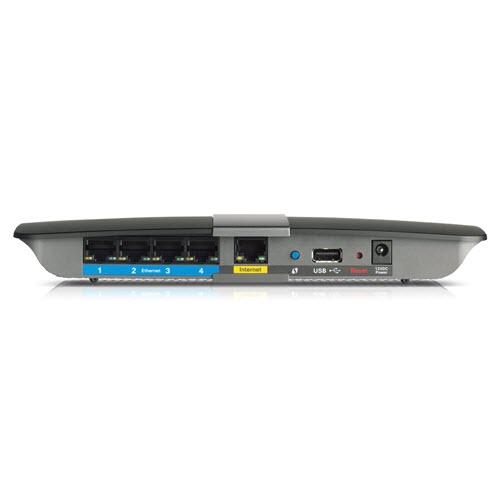 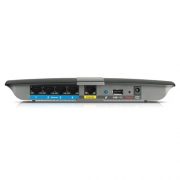 Be the first to review

The Linksys E4200 router brings the overall styling of Cisco’s Linksys E series up a notch, looking more like an expensive jewelry gift box than a router. With the flat shape and internal antenna design, the router is also compact compared with its peers. Its features allow you to leave it out in the open, rather than hide it, as you would most other routers. Unfortunately, you do want to tuck away its power adapter, which is disproportionately large for a router this size; it’s about the size of portable charger for a small laptop.

The router comes with four LAN ports and one WAN port on the back. All are Gigabit-capable, meaning they support throughput up to 1,000Mbps. Also on the back you’ll find the push button for the Wi-Fi Protected Setup (WPS) feature, a recessed reset button, and a USB 2.0 port that can host a USB external storage device for the router’s network attached storage (NAS) function. WPS allows you to conveniently add WPS-enabled clients to the wireless network via the push of a button. Unfortunately, like the E3000, the E4200 isn’t designed to host a printer, which is a little disappointing.

On the front, the new E4200 forgoes the usual array of status LEDs. Instead it has just one white light, in the shape of Cisco’s logo, that blinks when the router’s booting up (or something is not right) and stays solid when everything is in order.

Like all routers in the E series, the E4200 comes with Cisco Connect, which helps novice users set up and manage the router very easily. Anyone who can use a computer mouse can get the router up and running within about 5 minutes.

By default, the software set up the wireless networks by combining two of them–one for the 2.4GHz band and the other for the 5GHz band–into one that shares same name and the same password. This is similar to how Apple sets up its Airport extreme. Though this makes things easier, it also means you won’t be able to manually pick which band to use. The password is then also used for logging in to the router’s interface. This network name and the password are selected at random, but you can change them if you like.

The Cisco Connect software also allows you to turn the guest network (which is available only in the 2.4GHz band) on or off, manage the parental control features, and more. The software is very limited in functionality and requires a live Internet connection to work. In order to do more or to set up the router for an isolated network that’s disconnected from the Internet, you’ll need to use the router’s Web interface by pointing a connected computer’s browser to 192.168.1.1.

The good news is, unlike with previous models, the E4200’s Web interface’s functionality encompasses that of Cisco Connect. For this reason savvy users can and should skip the Cisco Connect software entirely, so they can be in complete control of the router’s settings.

In the end, it’s best to use either the Cisco Connect software if you are a novice user, or the Web interface if you are a savvy user, but not both. We tried using both of them to change the router’s settings and sometimes ran into situations when both stopped working and we had to reset the router.

Features
The Linksys E4200 is a true dual-band router, meaning it has two separate access points–one for the 2.4GHz band and the other for the 5GHz band–that can work simultaneously. It can also create an additional separate wireless guest network, on the 2.4GHz band only. The E4200 is also the first we’ve reviewed that offers the higher 450Mbps speed on the 5GHz band. This is because the router uses the newer three-stream standard. To take advantage of this new speed, for now, you’ll need to have a laptop equipped with an Intel Centrino Ultimate-N 6300 or 5300 Wi-Fi adapter. In the future there will also be USB adapters and add-in cards that support this speed.

Guest networking is a great solution when you want to share the Internet with others but want to keep them from accessing your local resources, such as files or printers. The E4200’s guest networking feature allows only 10 clients max, which isn’t very many. Though this is enough for home use, it’s not good for a public place, such as a cafe or restaurant.

The E4200 has simple support for network storage, including the ability to share the content of a USB external hard drive (formatted using either NTFS or FAT32), with user account restriction. By default the admin account has full access, including the ability to create more user accounts. It also has a built-in UPnP media server that allows you to stream digital content to other UPnP-compliant devices, such as set-top boxes or game consoles. Unfortunately, though streaming music and photos worked well in our trials, the video streaming wasn’t smooth and sometimes didn’t seem to work at all. This is mostly because the router doesn’t have enough power to offer the fast storage throughput required to stream high-definition content.